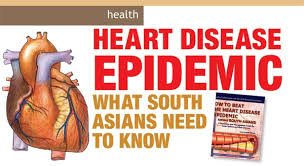 A new study found and published that most of the Indians are dead by the emerging heart disease and this rate will increase by 2015.

According to a recent study by the Registrar General of India (RGI) and the Indian Council of Medical Research (ICMR), about 25 percent of deaths in the age group of 25- 69 years occur because of heart diseases. If all age groups are included, heart diseases account for about 19 percent of all deaths.

It is the main cause of death in both males as well as females and in all regions of India, the study found.

India, with more than 1.2 billion people, is estimated to account for 60 percent of heart disease patients worldwide.

According to the World Health Organization, heart related disorders will kill almost 20 million people by 2015, and they are exceptionally prevalent in the Indian sub-continent.

It is estimated that India will have over 1.6 million strokes per year by 2015, resulting in disabilities on one third of them. The need is urgent.

It is in this context that the American Association of Physicians of Indian Origin (AAPI) has launched educational “Networks” of renowned thought leaders in the areas of Cardiology, Diabetes, and Stroke to foster high quality medical education of physicians of Asian Indian origin in the US