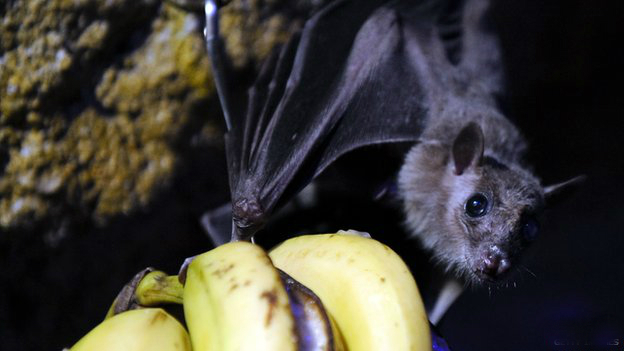 Guinea has banned the sale and consumption of bats to prevent the spread of the deadly Ebola virus, its health minister has said.

Bats, a local delicacy, appeared to be the “main agents” for the Ebola outbreak in the south, Rene Lamah said. Sixty-two people have now been killed by the virus in Guinea, with suspected cases reported in neighbouring Liberia and Sierra Leone.

Ebola is spread by close contact. There is no known cure or vaccine. It kills between 25% and 90% of victims, depending on the strain of the virus, according to the World Health Organization (WHO). Symptoms include internal and external bleeding, diarrhoea and vomiting.

It is the first time Ebola has struck Guinea, with recent outbreaks thousands of miles away, in Uganda and the Democratic Republic of Congo.

Mr Lamah announced the ban on the sale and consumption of bats during a tour of Forest Region, the epicentre of the epidemic, reports the BBC’s Alhassan Sillah from the capital, Conakry.

People who eat the animals often boil them into a sort of spicy pepper soup, our correspondent says. The soup is sold in village stores where people gather to drink alcohol.

Other ways of preparing the bats to eat include drying them over a fire. Certain species of bat found in West and Central Africa are thought to be the natural reservoir of Ebola, although they do not show any symptoms.

Health officials reported one more death on Tuesday, bringing the number of people killed by Ebola to 62, our correspondent adds. The charity Medecins Sans Frontieres has set up two quarantine sites in southern Guinea to try to contain the outbreak

Health authorities are receiving help from the WHO while messages are being broadcast on national television to reassure people. Sierra Leone’s health ministry said it was investigating two suspected cases of Ebola.

“We still do not have any confirmed cases of Ebola in the country,” its chief medical officer Brima Kargbo told AFP. “What we do have are suspected cases, which our health teams are investigating and taking blood samples from people who had come in contact with those suspected to have the virus,” he added.

Mr Kargbo said one suspected case involved a 14-year-old boy buried in a Sierra Leonean village after he apparently died across the border in Guinea two weeks ago, AFP reports.

The other patient was still alive in the northern border district of Kambia, he added. Five people are reported to have died in Liberia after crossing from southern Guinea for treatment, Liberia’s Health Minister Walter Gwenigale told journalists on Monday.

However, it is not clear whether they had Ebola. Outbreaks of Ebola occur primarily in remote villages in Central and West Africa, near tropical rainforests, the World Health Organization says.