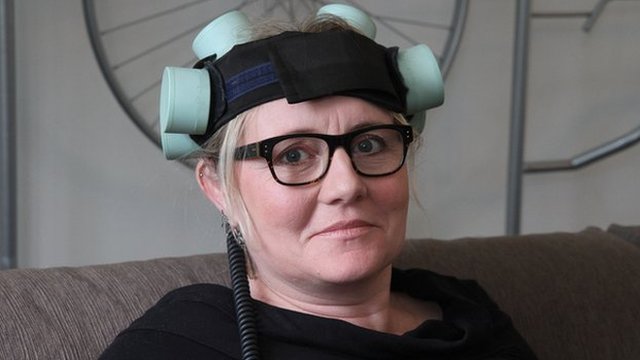 A helmet that delivers electro-magnetic impulses to the brain has shown promise in treating people with depression, Danish researchers have said.

About 30% of those with the condition fail to respond to medication or psychological counselling. The new device targets malfunctioning blood cells in the brain.

In clinical trials two-thirds who used it reported that their symptoms had disappeared, and improvements in mood were noticeable within a week. The helmet was tested on 65 patients with treatment-resistant depression.

The trials were conducted by the Department of Cellular and Molecular Medicine at Copenhagen University and the Psychiatric Centre at Hillerod in North Zealand.

Patients also continued taking their regular anti-depressant medication for the eight weeks of the trial.

“The helmet is amazing,” said Annemette Ovlisen, a graphic artist who suffered recurrent depression for 16 years and a participant in the Hillerod trials.

The pulses are so minute that the patient cannot detect any sensation, and the only side effect so far is occasional “tiny” nausea that immediately disappears after treatment.

Prof Steen Dissing, of Copenhagen’s Faculty of Health Sciences is the helmet’s principal architect. He said: “The device mimics electrical fields in the brain, and triggers the body’s own healing mechanism.”

The pulses activate capillaries in the brain, which form new blood vessels and secrete growth hormones. “We think it works so well because we have imitated the electrical signalling that goes on in the brain and we figured out that this signalling communicates with the blood vessels,” said Prof Dissing.

“And blood vessels do communicate with blood tissue. And we found that communication pathway.” In the trial, whose results were published this month in the journal Acta Neuropsychiatrica, 34 patients received half an hour of T-PEMF once a day, and 31 had two 30-minute doses.

The treatment had the additional benefit of enabling patients to improve their tolerance of the anti-depression medicine, researchers found.

They are currently seeking permission from the European Union to market the helmet within six months to a year, and said the potential demand was enormous.

Depression rates rising
According to the World Health Organization, more than 350 million people are suffering from depression and the number is rising, especially amongst the elderly, where one in five succumb.

At its worst, depression leads to suicide and one million take their own lives each year.

Raj Persaud, a consultant psychiatrist in the UK, said: “It is an exciting and important development as it shows that this treatment works at an acceptable level of efficacy and has low side effects.”

A similar treatment – Transcranial Magnetic Stimulation (TMS) – had also been shown to be an effective treatment for depression, but no more so than taking anti-depressants, he said.

“Pregnant women and breast-feeding mothers who may not want to take an anti-depressant may find this treatment more acceptable.

“This uses and administers less electrical power than TMS, another reason why it’s theoretically interesting, and it’s self-administered, which TMS is not.

“However, most health services will be reluctant try this new treatment because they will not want the additional costs and would prefer to stick to anti-depressants.

“This is a mistake in my view, as with depression the more possible effective treatments you can offer, the better. “Only roughly one-third of people get better with anti-depressants, so having other treatments to try like this is a good thing.

“These treatments will be unpopular with health services because as well as initial start-up costs, there is training of technicians and clinicians.”

ECT replacement
Prof Dissing believes the helmet could ultimately replace controversial electroconvulsive therapy (ECT), which has been used to treat the most severe forms of depression since the 1940s.

ECT patients are sedated before being strapped to a stretcher and subjected to a dose of current that generates an epileptic fit lasting 20 to 50 seconds.

Some psychiatrists regard ECT as a life-saver, while detractors deplore side effects such as memory loss, and in some extreme cases, personality changes. The Danish helmet employs completely different technology to ECT and should not be compared, says Prof Dissing.

Colleagues at Odense University are so impressed with his invention that they will conduct an experiment in May to determine whether T-PEMF can have a positive impact on the degenerative Parkinson’s Disease.

It is hoped patients will see an improvement in symptoms such as limb stiffness and tremors.